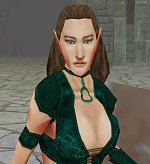 Friday, February 25, 2005 7:15:13 AM
The EQTypes for the additional buffs slots have been assigned. I have modified both EQUI_BuffWindow.xml and EQUI_ShortDurationBuffWindow.xml in my Buff Window Customization so that the text labels now work. Due to the verticle length of the Window I am contemplating trying out a two column format buff window. Hmmmm.. :)
Wednesday, February 16, 2005 8:20:12 AM
With the release of Dragons of Norrath, the Buff windows were changed to allow for more buffs. As such, I have modified my Buff Window Customization accordingly. I have also gone away from using the EQUI_Animations.xml file since that one tends to get changed more than most and usually is the main cause for the UI blowings chunks after patches LOL. Both the EQUI_BuffWindow.xml and EQUI_ShortDurationBuffWindow.xml have been modified. The EQTypes for these additional buffs have not been assigned yet so the corresponding labels (text) will not work. As soon as they are, I'll make the modifications. My buff window is getting long now LOL. I may also play with the blue background graphics by customization the CS_Buttons.bmp directly which will give similar results as the Animations file modification.
Saturday, February 12, 2005 11:22:44 PM
Well, it seems as if the EQUI_ShortDurationBuffWindow.xml was modified to allow for 5 more buffs. I have modified my Buff Window Customization to include the changes made. I also changed it so that window is sizeable.
Tuesday, September 28, 2004 3:14:42 AM
Logged on to EQ today, well yesterday, and noticed that the EQUI_Animations.xml and EQUI_BuffWindow.xml files had been changed to allow for 5 extra buffs as part of the Omens of War expansion. As such, I have modified my Buff Window Customization to be compatible with this change. As a result, the buff window had to be made longer.

Update: I have now updated my combination Player/Group/Target/Casting Window to include the LFG button on it in the bottom-left corner.

At the moment I am working on an interface that will work with all my characters, both Melee and Caster and at any level. This interface should work with any patches made before the date above. If there is a patch which modifies the default user interface I will be sure to test/modify mine as soon as possible.

I have provided individual parts of the interface I use with each part containing the files it needs to work so you can decide which parts you want to try. If you want everything, then Download Zipfile of Mysstie's Complete User Interface (Self-Extracting Version). This contains all the files listed below within the individual parts. To see what my complete interface looks like in one screen shot (I run at 1280x1024 at the moment): Complete Screenshot.

This is my adaptation from the combined Player/Group/Target/Casting Window that Loral made. His skin is available at Loral's Custom User Interface. My changes were to include the Stamina and Level Experience bars which caused the Window to be a bit taller (there are some other things I will add on here so I left myself room). The bars are in this order:

Following are some examples of it's appearance:

There are some player window modifications out there that cause things such as the Player Name and Hit Point values to not appear in the Inventory Screen. This one does not cause that to happen and I think I know why. It has to do with having unique item and ScreenID variable names within the code. The EQType number is the part that identifies what the actual information is to be displayed. Anyway, I'll probably make a separate area for information dealing with actual coding hints.

This is a combination of Loral's Custom User Interface and RedBarsh's EQ UI Skins. It is a specifically sized window to show the current spell effects/buffs on you vertically with a small spell icon/gem on the left with a text description to the right. Some custom buff windows seem to leave an "Unkown Spell" in the text area when the spell wears off. This does not. Beneficial Spells (buffs) will have a blue background. Bad spells (DoTs, Poison, Diseases, etc.) will have a red background. The spells also flash on/off when they are about to run out like normally happens. While the window might be a bit wide depending on your resolution you can just move it off to the right and only let as much of the text description show that you want. I also set it to faded value of 5% so the window is hardly visible (this is not hard coded, it will use whatever you have yours set to.)

Saturday, January 11, 2003: I have customized the new Short Duration or Song Buff window to be similar to my Main Buff window. I left the title of Songs on it so you know which one you might be dragging around. It will look the same otherwise. Oh, it is shorter, enough for the six effects that can appear.

This one is all mine. I was playing Tracey and I didn't like the fact that the Feet Like Cat and Root spell gems/icons looked so much like. So.. I changed the graphic to include "Root" in the graphic. The change will appear in both the Spell Book and Spells Memorized Windows. I have more spell icons I want to change.

I modified the file that has the Inventory Slot graphics so that it has the name of slot. Some of the background graphics could be confusing and the less I have to think the better. :) I was inspired by RedBarsh's EQ UI Skins.

One word of caution for anyone working with this file, it contains a mask channel and you need to make sure you save your new file with the Mask Channel present. The first time I didn't do this and it caused my spell gem icons to not show through (just solid black where the icon would be). This file happens to contain those oval shapes used in the memorized spell window.